As I mentioned before, I would tell my hometown story not chronologically, but randomly based on my swinging mood everytime I can and not busy enough. By the way, for this edition I’d like to tell about my last day of 2015’s journey with my cousin’s son.

I had an appointment for spending my 31 December’s journey only with my nephew. I mean, not going with my sister’s children on the day, as we have already scheduled our time. We just communicated through facebook, not face to face as I rarely meet him in the real life, he’s still struggling with his thesis in Malang, while I am in Tangerang (approx 900 km). He promised for picking me up at 8 a.m on the day. 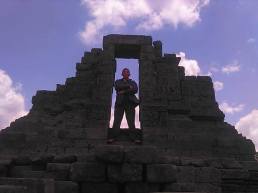 But while I was waiting for him, he sent message for delaying our schedule as he needed to sleep over after all night long working. Then, he fetched me at 10.30 am under cloudy weather. We rode motorcycle as it’s more flexible than car and I couldn’t drive any car, just motor and bicycle. On the way, we stopped for checking tyres. My nephew asked me :

We rode for around 30 minutes from Malang to Candi Jago (Jago temple), as it’s just 22 km from Malang and part of Tumpang municipality. The temple was close to Tumpang downtown, after passing the crowded marketplace and turned right for around 200 meters, we could reach Jago/Jajaghu temple.

We came there at 12 am, and there were some teenagers spent their holiday there. The complex was clean and well-managed though we didn’t need to pay any admissions. Just fill in guest book. During our visitation, I and my nephew talked about anything, from family, local until architecture issues, as he’s studying architecture. He asked too anything about ancient architecture and I told him in the future I want to have such traditional house for me and my family.

The Jago temple itself was built in around 1268 AD for commemorating King Wishnuwardhana of Singhasari (the kingdom itself run for merely 68 years prior to be vanished in 1293 AD). The top of the temple has already been lost even when it was rediscovered in the 19th century. There were two kinds of reliefs on it, the first recited about Ramayana, while the rest about Mahabharata. I came there for the first time in 1987 during school touring and I felt in love with temple travelling since then.

The condition particularly the park was much better than before, clean and tidy. However, when some teenagers threw an empty plastic bag on the top of the temple, I told them directly to litter it downstairs, in the available garbage pin. I also took two videos there, one in Esperanto, and another one in French. No preparation, and not fluent at all, but I love it. Hopefully I can do that often and better. 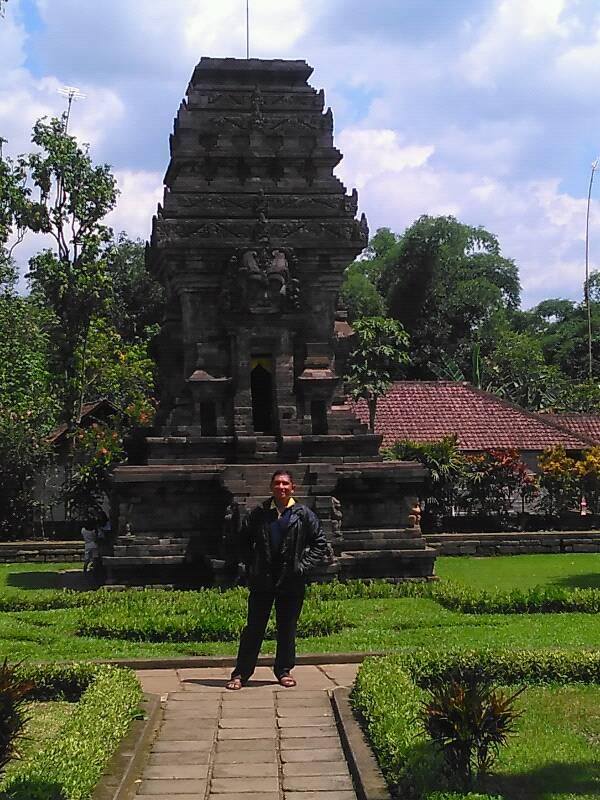 After visiting Jago temple, we continued our journey to Kidal temple. It’s around 7.5 km of Tumpang down town to the west, and we passed around village road and forgot the way. The temple was empty, even the security was out. That’s why we entered by ourselves to the complex. The temple is only single building where King Anusapati (Wishnuwardhana’s father) was buried and it was still visited for praying, especially for the Hindus. The building represented East Javanese style, slimmer than Central Javanese one.

I and my nephew discussed about the structure, he said the entrance was to steep and can injure when we were not careful enough. There’re also some garuda relief which becomes my almamater’s logo, Airlangga University. It reminded me to the past, when I visited the temple for the last time….8 years ago. Nothing change, but the park was beautiful for me. For almost an hour, I and my nephew had small talk about religion and the recent reality…sometimes I opposed his opinion and vice versa, as I am more loose than him about religious view, but I remain observe in the religious regulations as I usually do since my childhood.

The temples should be promoted more than before, and it’s a good tools for history education particularly students. They must be taught to respecting our ancestors’ heritages as far as it doesn’t break religious rules. Old temples should be preserved and informed to surroundings, as Soekarno’s quote “Never forget your history”. I keep his quote up to now and love all historical sites. I wish I could visit Gunung Padang one day.

The journey was fun, I had a pleasant and hearty discussion with my nephew and it’s the greatest activity for closing 2015.