Malang is located in Eastern part of Java, Indonesia. It’s around 800 km from Jakarta, 300 km from Jogjakarta, 90 km from Surabaya and 400 km from Denpasar, Bali. It’s in the heart of East Java Province and surrounded by mountains. It’s my hometown where I was born and raised up. I passed my happiest and hardest times in this town which is sometimes called Parijs van Oost Java during its heyday.

This photo set shows Malang’s landmark called Alun-Alun Tugu Kucecwara (Undefeateble). Then, it was called Jan Pieterzoon Coen Park and the monument was built in 1946 but bombed during Dutch’s agression in 1947. It was rebuilt and officially opened by Soekarno in 1951, since then it becomes Malang’s landmark.

This is my favourite place when I return home. Sometimes I go with my family, and mostly alone. When I stay there, I just keep silent and looking at the lotus pond. I love my hometown and this is my happy place where I want to be interred one day if my world’s duty is over. (These photo were taken last year, but don’t worry..it’s still great). 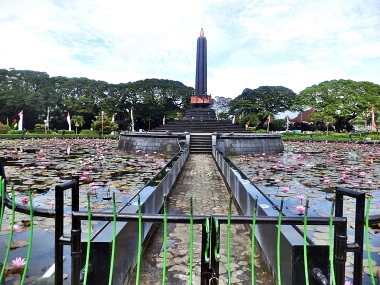