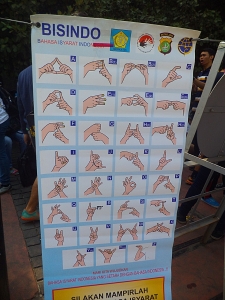 Everywhere we can learn
Even in an unexpected or unthinkable way

Jakarta Car Free Day is part of my week-end agenda, even though I just join the event once a month and in the same place, between Jl. Thamrin- HI roundabout (Bundaran HI)- Sudirman. I am always curious about the happenings there, unlike Car Free Day in other places. We can do anything there (as far as acceptable according to the values) such as doing demonstrations, promotions, particular community gatherings, culinary matters and much more from 6 – 10.30 am. Yesterday I learnt a not really new thing. While waiting for 11 a.m as I wanted to visit my friend’s house, I walked around HI roundabout and after seeing save rhino community (only 100 Sumateran rhinos are left in the wildlife of Sumatera, while in Malaysia Penninsula, it’s already been extinct), I met a special community…the deaf club who spread and teaches Indonesian sign language to broader people.

Honestly I have already heard about the language years ago, even I learnt some expressions of the language. As far as I heard there are many variations of sign language in Indonesia, and what I met was the standardized one. Surely, Indonesian sign language is different to English or International sign language in several ways. For a while, I just walked and saw the group’s activities. They taught the commons to learn the sign language, and I know the deaf one also needs communication tools to open a conversation. I could see many of them talk each other happily, but I couldn’t follow it well as they use sign language. They spoke normally and it interested me to try.

Then, when I took a chair, someone called me up by waving his hand, and I knew he was deaf. He asked me to sit in front of him. From his manner and hand signs, I could see he wanted to teach me the language. He opened his file and showed a paper. It’s merely alphabet, and he pointed one letter then told me to follow his hand movement. From A until Z…It’s quite different to the international one. For the first, it was hard as I have already forgotten the language. He repeated many times, and you know, I am easily confused with something new so no wonder I made many mistakes. Mislead, misform and mismatch…that’s all I’ve done so far. But as a wise man says “mistake is the prove that you’ve tried” had motivated me to know more and more. 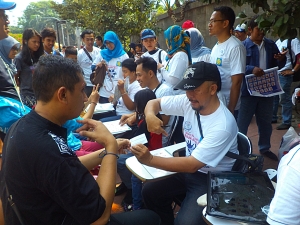 Indonesian sign language is called Bisindo or (Bahasa Isyarat Indonesia), some letters are similar to the international sign language, but others aren’t. I learnt some expressions like how to say “terima kasih” (thank you) and “sama-sama” (you’re welcome) as well as mention my name. After 15 minutes, I could imitate what the man taught and from his signs, his name was Agus. I could read it. The day was getting hotter, he gave me a card and wrote the date on it. He said, if I wanted to learn again just visit and continue the lessons until 10 times and if I had already passed the 10th, I’ll get 50% off for buying Indonesian sign language dictionary.

What I believe, everyone, though they’re diffable, they need to communicate and there must be a language facilitator to express what they want to say. Sign language is also part of the tools, and among the deaf persons, sign language is extremely important. However, most normal people couldn’t understand what they say and even ignore their rules in society. Or in many cases bullying or discrimination to them are still prevalent, and I think by introducing the sign language to wider society, it will raise up more social acceptance and tolerance as they also have potentials for being part of national power. We sometimes do not know about them, but by being able to speak the sign language, we can broaden our network, having more friends and world will be better.

Okay, next week I’ll be there for the second lesson and hopefully I can add my language skills besides others.