Gemstone fever!
It’s the hottest and most recent trend happening among Indonesians. Gemstones are everywhere! They’re already sold even in pedestrian and one another is very close (maybe around 100-200 metres you can find gemstone sellers). Gemstones are part of human’s jewel and usually large one like agate (batu akik) is identical to men and it’s worn usually by them. Even some of them wear the gemstone rings until full of his fingers like one of the famous Indonesian comedian, Tessy (he’s now on trial because of drug abuse). His agate rings had been iconic part of his effeminate image.

I used to wear big agate ring when I was still in high school. People said wearing agate ring can enhance your charisma (as well as particular gemstone which has magical power). Jade, emerald, sapphire, agate, ruby and many more are actually common part of our jewelry and they have got their own charisma. Gemstone fever sometimes makes me dizzy, because when I walk and meet many people, there’re increasingly more people wear any gemstones! from the cheapest until the most expensive ones! As far as I know (from my survey in some gemstone sellers), the cheapest one can be IDR 85,000 and surely the most hang necking one is almost billions. All depend on the solidity, quality, as well as its motives. More distinct, more expensive..even the rarest must be highly prized. Even now, larger is better. If your stone is bigger, the price can be raised up! 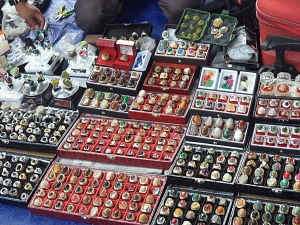 One municipality in Central Java (Purbalingga) has got its unique news about gemstone fever. The regent required all his staffs for wearing local agate rings, and his reason is for promoting Purbalingga’s agate stone as well as for aesthetics. While in Aceh, a 20 tones jade has already found in the forest. Locals and newcomers fought briefly for getting the giant precious stone before police keep it by giving police line and protect the stone from stealing and smuggling.

My friend also told me, her 12 years old son also asked her to buy one gemstone for him. Even when her son are playing with his friends, their hottest topic is about the most beautiful gemstone, not girl, then! Ladies? They have their own trend. They also buy agate stone, and wear it as pendant for the big stone, while the smaller one becomes ring. This is the newest and hottest trend among Indonesians, and as you see many gemstone sellers are everywhere. I don’t know more how many gemstone they have already collected, either one or more than ten!

The gemstone phenomenon cannot be apart of the old myth as it is believed to be medium. Medium for charisma, aphrodisiac, beauty, passion, or just merely following the trend. The truly agate and other gemstones owners will keep their collections well and even make it into part of their business, while the others are merely followers and I believe, trend is temporary and it will be changed or replaced by another more attractive trend…one or two years later. I just look at the trend, but never really follow it as I know it is not long lasting.

And the three others are my own collections