Honestly, it was hard to interpret the meaning of ‘fray’, as I rarely use this word. In bahasa Indonesia it means ‘percekcokan’, ‘kehebohan’ and many more…but for this case, I choose the ‘kehebohan’ or excitement. The exictement here when I made cassava balls called Gethuk. As a traditional Javanese cuisine, I sometimes make it when I was at home. There are many variations of gethuk and I tried to mix it with cheese as well as food colouring. Many colours and so brightly till people were afraid to eat it as it’s suspicious for being given textile colouring. Hahahaha… No way! What I made here were natural, just I added the colouring too much. Rainbow cassava balls or Gethuk pelangi and I serve it with skewer and shredded coconut.

That’s fray, right? because it excites everyone. Hehehe

And the colours were fighting each other (I ever posted it, but I have another perspective here)

Special for this challenge 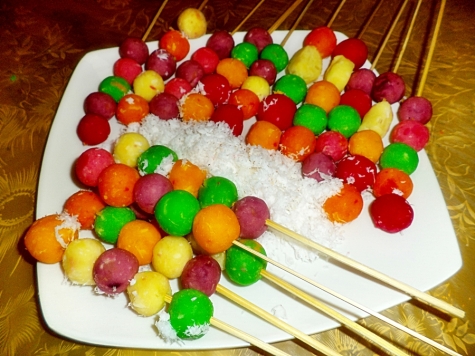