Little information :
In Bahasa Indonesia, Chinese Temple is called ‘Klenteng’, different to Malaysian which calls it ‘Tokong’ or ‘Tokong Cina’. Word ‘Klenteng’ or ‘Kelenteng’ derives from onomatopoeia of the bell and it sounds ‘teng’, ‘teng’, ‘teng’. And Indonesians then call it Kelenteng.

For the sixth day of my holiday in my hometown (Malang, East Java), I visited Eng An Kiong temple which locates near Pasar Besar/Pecinan Malang. I came little bit late, as it was close to Friday Juma prayer. However, I just wanted to visit for a moment. I’ve visited many Chinese temples, yeach…at least in Semarang I’d come to more than 10 temples (let me count it first, then). En Ang Kiong temple was supposedly built around 1825 and En An Kiong means “Palace of Savior in God’s Eternity”. I think it was Hokkien…not Mandarin (hahahaha). Why? because when I mention ‘Ceng Beng’, ‘Cakue’, ‘Co Kong Tik’ etc…all my colleagues who come from Northern China do not understand at all. Hehehehe.

Well, enjoy this temple with the beautiful but small pond inside. 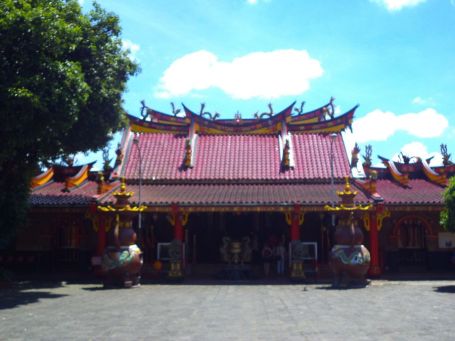