Dugderan is an annual tradition celebrated by Semarangese, Central Java and the tradition has been existed for more than 150 years. Dugderan derives from two onomatopea ..”dug (doog) means hit things such as beduk (used at mosques) and “der” (bang) from firework. It was held initially for gathering Muslims around Semarang around mosque and the regent would like to announce the commence of Ramazan along with the ulama. Initiated by ‘Dug’ and ended by ‘Der’, so that’s why it’s the origin of DUGDERAN tradition.

One week before Ramazan, there is a special market called DUGDERAN market located around Semarang Grand Mosque (Masjid Agung Semarang). It looks like ordinary bazaar, but some also sell an imaginary creature for kids named ‘Warak Ngendog’. Warak Ngendog has got so many meanings as it is representative of various cultures exist in Semarang. Chinese from its face and color; Arabic from its hair, and Javanese from its body. Combination between goat, dragon and camel as people said. Warak Ngendog has become Semarang’s mascot and it appears everywhere.

DUGDERAN nowadays is still celebrated as tradition before Ramazan and Warak Ngendog dolls are sold out because it only appears once a year.

I have left Semarang and I missed this celebration. I hope next year I can visit Semarang again for celebrating DUGDERAN. Here I’d like to share to you DUGDER dance as representative of Semarangese happines for facing this forthcoming holy month.  (taken at City Hall 2011) 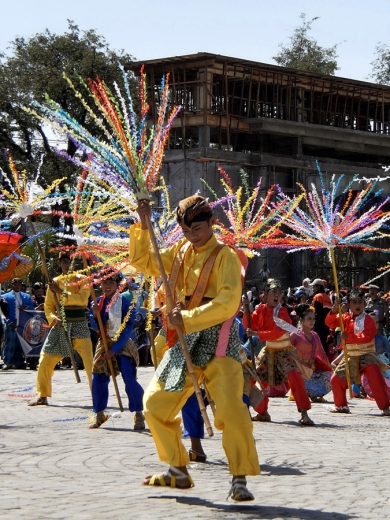 Hopefully you’ll get bless and grace from Allah…