gh all Chinese cultural aspects were oppressed during New Order (1966-1998), but many of them still survived. Linguistically, especially in Java and Eastern Indonesia, most of Indonesian Chinese have lost their ancestral languages and assimilated into Bahasa Indonesia or local languages they live, while most of them also changed their name in order to be more Indonesian sounding, and even most of Indonesian Chinese have adhered Christianity as their belief, however, after reform era in 1998 which signed the end of New Order, Chinese cultures seem to get a new breathe in Indonesia.

Not just Barongsai (Lion dance), Liong (Dragon dance), recognition of Confucianism as one of recognized religions, or wayang potehi and Imlek (Chinese New Year) as national holiday which can be seen nowadays, but also some others such as paper house burning or –if I am not mistaken- Co Kong Tik (I don’t know what language it is..Hokkien or Teochiew, but surely it’s not Mandarin). It is a Chinese tradition related to death people. This tradition is usually held after 100 days someone passed away. The deceased’s family then prepare his or her ‘new eternal house’ right after their family member kicked the bouquet of daisy. The ‘house’ is made of selected papers, even if so, some of the papers are imported directly from China.

In Semarang, I ever visited a paper house maker in Gang Cilik (Small alley) within Semarang Chinatown (we call Pecinan). He has been producing the eternal house since 1960s and his ancestors were also the eternal house makers when they were still in China. Talking about the size, the eternal house depends on family’s financial abilities. Though actually it is not a must, but some still believe that eternal house burning represent their love to the deceased. As the maker said, at least for the smallest eternal house, it costs IDR 1 million, while the largest one can be more than IDR 10 millions up. The house is usually complete with furnitures, rooms, servants and it is made in perfectly detailed as the family requested. Besides house, they also prepare vehicles, money box, clothes (all are made of papers), and some deceased’s belongings, as well as paper money for his or her in eternity. There is a different view between Confucians and Buddhist. As far as I know, for Buddhist, house paper burning here is intended to fasten the deceased’s reincarnation (correct me if there’s a mistake).

The eternal house burning is held in a Chinese Temple (we call here Klenteng), and it can last for hours (in my experience, more than three hours) or in some cases, one day from morning until evening with some breaks.

In the temple, there have been prepared the eternal house which looks as if the real house with all its properties, along with the eyes covered gods (which will be pulled out when the ceremony starts) and long tables with offerings whose numbers similar to the deceased children.

The rites was started by praying led by the priest and the language spoken during pray was Chinese and Pali, as well as translated into Bahasa Indonesia. What I remembered here was praying several times in different directions, then followed by giving respect to their deceased family and stopped a while for having dinner along with anyone there. At the time I was offered mie titee (pork leg noodles), but I said I couldn’t eat it (as pork is unlawful in Islam) so I just had es campur and wedang kacang (peanut beverage). Then, the rite was continued by pray to god whose responsible to debt and financial, and the god was burnt for bringing messages to the nirvana.

Afterwards, the house was brought out of the temple. The deceased’s family prayed by walking around the house several times, after pouring the paper money surely. Finally, the house was burnt which done by family members, especially the children. But before, the family took pictures near the house prior to be ‘sent’ to their deceased family.

I have seen the rite twice, one in a temple on Jl. Sebandaran and last week in Tay Kak Sie temple (Gang Lombok).

This tradition is rarely seen (my friends even saw it for the first time when I guided them to Semarang Chinatown), even once a year and not all Chinese families do this rite. But seeing this event has widened my point of view about many beliefs in Indonesia. The differences shouldn’t be viewed by only one sided-mind, but  through many sides and it will grow our tolerance towards others. This is what I dream about Indonesia. 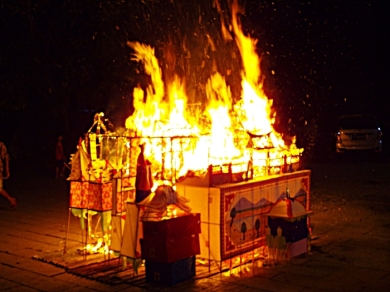