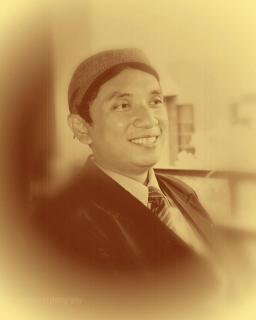 For those who have known me…let me re-introduce myself again. I am still newbie in this blog, and let me share more about what I know, feel, think and get in this new home. I am a teacher in a Semarang-based international school. Formerly I was English instructor, but now I am teaching ICT and Bahasa Indonesia. Hei! Bahasa again! Sometimes I wonder how can foreigners call my national language as simply ‘Bahasa’, not Indonesian or Indonesian language.

A very vital communication tool which connect one to another and create relationship in society. What do you think if there’s no spoken language? There will be more sign languages appear then…but, they’re still language right? Sign language into ‘heart’ one. I have been into languages since I was 9. I was raised up as bilingual, but the first language I received from my parents was Bahasa itself! I didn’t know and ask because I was too young to think critically. Time went by, I was exposed to Javanese with my peer group and also among my cousins when we played. However, I was just able to speak Javanese perfectly when I was in Junior high school….by two factors, naturally and forcibly.

I love language so much, but I am such stubborn and lazy student so that’s why I master those languages partially…ermmm..at least..familiar in it.

Let me talk about languages I learn, but for the first part here, I’d like to tell many things about my first two languages.

You know, I was raised up as bilingual as most Indonesians were. I don’t know exactly about the bilingualism percentage in Indonesia as I don’t have any friends working at statistical bureau. If so, maybe I’d like to ask them about it then.

Yeach, when I write in English, I prefer to say ‘bahasa’ than ‘Indonesian’. It is derived from High Malay spoken and written in Riau archipelago and Johor. Essentially ‘Bahasa’ and ‘Malay’ are sister languages, but caused by political and historical development, those closely related languages differed significantly. Well, Bahasa itself comes from Sanskrit word Bhasa, while in Thailand called it Phaasa..Javanese says Basa (read boso).

Initially it was still called Malay until 1928’s Youth Oath in Jakarta, it’s been renamed as Bahasa Indonesia. It is unifying language and plays very important roles in all parts of Indonesia, from west to east. It has got role as lingua franca for more than 237 millions who speak more than 500 vernacular languages. It’s wonderful for me. There’s no complain from other languages even though Javanese is more numerous.

Somebody asked me why Javanese never becomes Indonesian official language as its speaker is the most numerous (more than 50% Indonesians). My answers are :

Bahasa itself is grammatically simple, so you don’t have to think over about article, gender and time. Just add besok (tomorrow), kemarin (yesterday) and hari ini (today) or sekarang (now) or saat ini (at this moment), you can create ‘present, past and future’.

Yeach, initially my first language is Bahasa…Bahasa Indonesia, as my parents talked to me in the language but as I grew up, they gradually switch the language into Javanese.

So, I speak bahasa  in formal situation, to new acquaintances, and to someone from different ethnic group who cannot speak or understand Javanese. Sometimes naturally I mix it with Javanese words as additional flavour. I know that speaking pure bahasa is almost impossible except in very formal conditions, but by knowing its most formal style, you can be anywhere.

I am Indonesian in nationality and Javanese in ethnicity

Language, Love and Me (My second mother tongue)